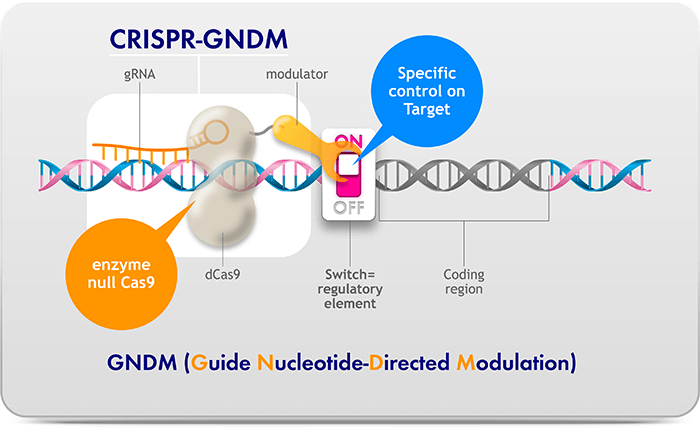 gRNA
A specific RNA molecule to recruit and direct the nuclease activity to the target region of interest.

modulator
A protein unit that manipulate epigenetics (switch) to turn ON or OFF a target gene. 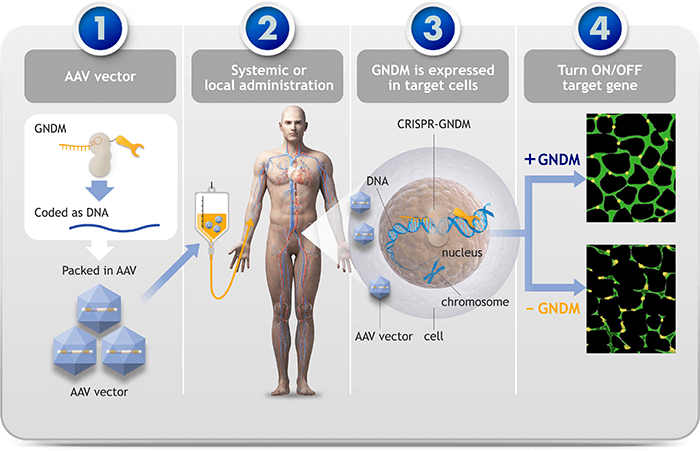 Like other gene therapies, CRISPR-GNDM employs AAV for delivery into patient cells.
A DNA fragment encoding all necessary components is packed into AAV vector (1). The AAV vector is administrated into target tissue locally or systemically (2). The AAV vector transduces target cells with GNDM DNA and GNDM is translated into protein to function (3). GNDM binds to a target gene to turn on or off to control insufficient or excessive amount of mRNA expressed from a gene.

AAV vector
AAV (adeno-associated virus)is most popular virus used for gene therapies as it is thought to be one of the safest and most potent virus with minor safety concerns reported. It is a small virus that infects humans and some other primate species. 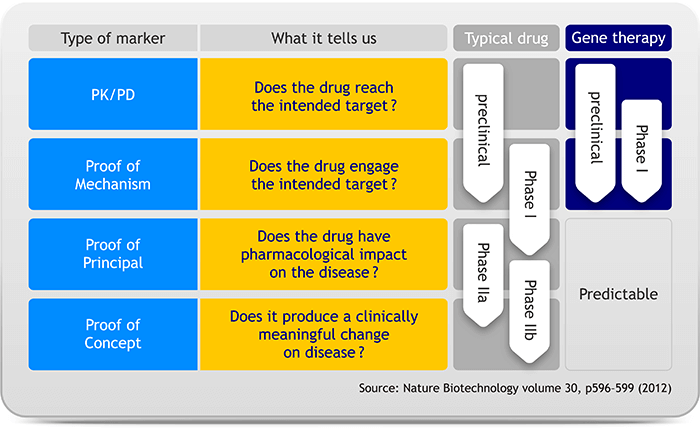 There are a few major hurdles for product development. As Modalis is targeting monogenic disorders, which are caused by a single gene impairments, some of the clinical hurdles are obvious when running a clinical trial. For example, proof of concept of the treatment is clear since the disease-causing gene is known and the disorder can be cured by reversing the specific gene impairment known to be causative for the specific monogenic disorder. This allow us to predict success of a CRISPR-GNDM drug development program relatively easier when compared to other therapeutic approaches.

PoM (proof-of-mechanism)
PoM could be based on showing that the drug interacts with the intended molecular receptor or enzyme, and/or affects cell biochemistry in the desired manner and direction.

PoP (proof-of-principal)
PoP refers to an evaluation of the effect of a new treatment on disease biomarkers.

PoC (proof-of-concept)
PoC is the earliest point in drug development process at which the weight of evidence suggests that it is “reasonably likely” that the key attributes for success are present and the key causes of failure absent.

Monogenic disorder
Monogenic diseases result from modifications in a single gene occurring in all cells of the body.

Clinical trial
A study with human subjects is conventionally divided into PhI, Phase IIa, IIb, and III.
Phase I is typically conducted with a small number of healthy volunteers to evaluate tolerability of the drug. Phase IIa is typically conducted in up to 100 patients with the disease of interest. Studies aim to show that the new drug has a useful amount of the desired clinical activity.
Phase III studies involve larger numbers of patients treated at doses and durations representative of marketed use, and in randomized comparison to placebo and/or existing active drugs. 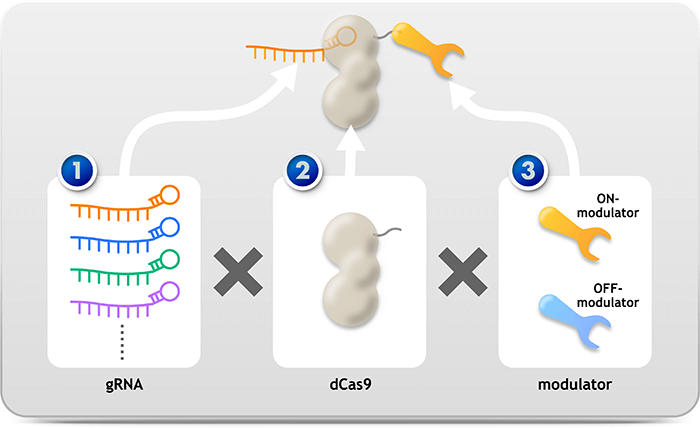 CRISPR-GNDM technology is readily applicable to various diseases by simply changing the gRNA sequences. Modalis develops best gRNAs for individual disease targets (1). The gRNAs are combined with dCas9 (2) and a modulator (3), invariable components of the technology.

Advantage of CRISPR-GNDM 3:
No cleavage of genomic DNA

Conventional genome editing is done by cleaving DNA. Double strand breaks (DSB) caused by the DNA cleavage is reported to increase cancer risks (Haapaniemi et.al., Nature Medicine volume 24, 2018). Another risk called “off-target effect”, which refers to unintended genetic modifications that can arise through genome editing, is also raised as a crucial concern.
CRISPR-GNDM, on the other hand, is the unique method to alter gene expressions without the need for cleaving DNA but by regulating “switch”. This allows to treat genetic disorders while avoiding the risks.